THIRUVANANTHAPURAM: The T’Puram gold smuggling case has in a grim sense scripted history since diplomatic channels were misused by the politically well connected operators. Express delves into the issue which threatens to rock the LDF boat in an election year

Gold’en memes and witty remarks have een flooding social media, ever since news of gold smuggling through diplomatic channel broke last Sunday. Two prominent images — both related to Chief Minister Pinarayi Vijayan, however, stood out. The first one was a 2013 speech by then CPM state secretary Pinarayi seeking then Chief Minister Oommen Chandy’s resignation, referring to a leaked photograph, in which Chandy was seen with solar scam accused Saritha Nair. His speech which had then created ripples, is now being discussed in a different context — with the image of Pinarayi at a function with smuggling case suspect Swapna Prabha Suresh.

The second one is a 2016 warning by Pinarayi himself, a day before he was sworn in, cautioning the public against ‘avatars’ who claim to be close to him. With elections fast approaching, Kerala politics is running into muddy waters. The main Opposition UDF and the BJP have left no stones unturned in dragging the CPM and its strongman through the slime. In its final year in office, the Pinarayi government is faced with a strange predicament. The most pertinent question would be — what could possibly be the ramifications of the smuggling case in Kerala politics? Could it topple the Left rule? The precarious current social scenario due to Covid-19 just serves to add to the fizz.

It is natural to draw a parallel between the solar scam and the gold smuggling case primarily based on two elements — the presence of a woman accused and the involvement of the Chief Minister’s Office. Pinarayi Vijayan has undoubtedly been ruffled and is now on a quick damage control mode. Removal of his secretary M Sivasankar, seeking Central investigation and probe into Swapna Suresh’s appointment are part of this move. The entire case has turned into a political slugfest, with hardly any attention being paid to smuggling aspect. “It seems nobody is bothered about smuggling and is going after Swapna. Elements of national interest and terrorism have taken a back seat, while some sort of a ‘body’ politics is being played out in front of the masses. It’s being used for sheer politicking,” said political commentator J Prabhash. Both the Congress and the BJP have latched on to the political significance in the gold case and are doing their best to milk the issue for all its political worth. 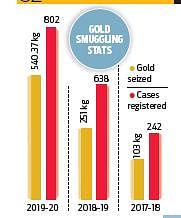 The tempo is being maintained with novel moves on a regular basis. The Congress believes that the case would have a direct impact on the elections. “The CM’s most trusted bureaucrat is involved. The CMO took special interest in appointing a woman to a key post with undue haste and undue interest, without even proper background verification. An irregular and out-of-the-way appointment was made. It has widespread ramifications and will have a bearing in the elections too,” KPCC president Mullappally Ramachandran told ‘Express’. Although a bit late, the CPM has zoned in onto the Opposition strategy. The LDF is concerned that the focus is shifting from Covid-19 control measures, thus taking away their well-earned momentum towards a probable electoral win. The party central leadership hence publicly welcomed any kind of investigation into the case.

The Left is now taking pains to keep the focus on the smuggling and economic offence aspect of the case. It is worried that the BJP may use it for electoral gains and target the Left. “With the probe going on, it’s easy to keep the flame burning. Calling a couple of CMO officials for interrogation itself will be sufficient to cast aspersions,” said a senior Left leader. Lately, the Left in Kerala has been riding on a single image — that of Pinarayi Vijayan. The state BJP feels that a deconstruction of Pinarayi’s image will be the biggest takeaway in the gold scam. It’s also confident that more skeletons will tumble out of the gold closet, if one digs deeper.

“As per my reading, the smuggling case has bigger political dimensions. Only in the coming days, will it be known just how deeper it goes. How many more in the CMO are involved? The NIA probe will bring out the facts. The CM’s secretary is involved, which is unprecedented. The appointments that he made need to be probed. We feel there were major political interventions in the matter,” said K Surendran, BJP state president. The saffron party feels that with more details coming out, it will remain in the public domain for a long time, obviously till next elections. The CPM admits that the smuggling case was indeed most embarrassing. 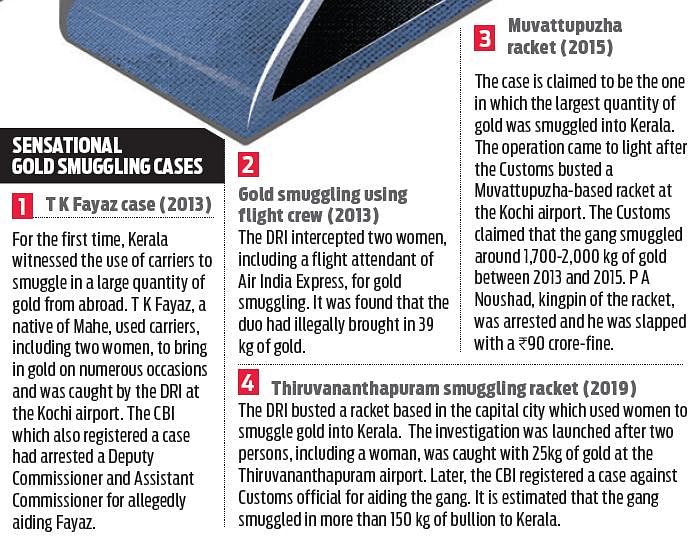 But will it lead to something else? No, the party feels. Whether the case will reflect on the fast approaching assembly elections depends on how subsequent developments unfold, says J Prabhash. Even as the NIA probe is on, the UDF is also worried about a tacit political understanding to decimate the Congress in the long run. The local body polls are just three-four months away, which in politics, amounts to a lengthy period of time. Will the chief Opposition Congress and the BJP be able to maintain the tempo till then, without losing focus, now remains to be seen. As the Covid scenario steps into its most worrying stage, this will of course prove to be a tough task on ground.

Smuggling with Kerala links Regarded as a case in which the largest quantity of gold was smuggled into the country, it was probed by the DRI Mumbai. The case originated when the DRI seized 185 kg of gold which was imported under the guise of scrap at the Mumbai port. It is estimated that the gang had smuggled in around 4,500 kg of gold in a similar fashion. The gang was allegedly led by a Perumbavoor native Nissar Aliyar who was later arrested. Four persons from Kerala had also been arrested by the DRI.

MISUSE OF DIPLOMATIC BAGGAGE FOR SMUGGLING

1.In 2001, smuggling using baggage sent to the mission of a European country was reported at the Chennai airport. However, the mission disowned the baggage and the probe didn’t get through to those behind it.

2.In 2013, a UAE diplomat was nabbed at the New Delhi airport after 37 kg of gold was recovered from him. He was accompanied by an Indian citizen. Though the UAE national sought diplomatic immunity, the DRI did not budge and checked the baggage. It was found that he had involved in a similar act before. Later, he was sent back to the UAE after the Ministry of External Affairs took up the matter with the embassy concerned